Leupold’s Mark 5 range are their premium long range and tactical usage riflescopes with three models, all featuring a 5x zoom capability in 3.6- 18x, 5-25x and 7-35x variants. I was using a 5-25, which is always the benchmark specification for serious precision rifle optics with a comparable 56mm objective lens.

The Mark 5 unusually uses a 35mm scope tube versus the more commonly accepted 34mm and Viking kindly supplied a set of Leupold’s own Picatinny fit mounts to anchor it securely. Overall length is 414mm, including flip-up lens caps on either end and the scope weight of 975-grams is competitive for the functionality on offer. The tube features a matte hard anodising, thankfully smooth without the tendency to draw all the dust particles from your skin.

The centre saddle is overall spherical in silhouette but shows quite unusual and characteristic flat facets to deviate from the norm. I liked the look of these and the very well-defined turrets. All clicks are MRAD based, with 10mm@100/0.01 MRAD per click on both windage and elevation.

On the right side, the former is under a cap with 5 MRAD (50 clicks) marked clearly left or right from the centre marker, itself slightly above horizontal, closer to the eye line peeping over the top for a right-hander or unobscured by fingertips to the left-handers.

The clicks are exceptionally well-weighted and tactile, slightly audible and overall, have a luxury feel with no overrun or requirement to watch your dialled corrections.

Elevation on the upper turret remains lower in profile, with a 22mm standoff above the saddle. It measures 40mm in diameter with some well-spaced squared off knurling for grip. Clicks are again delightfully tactile, balancing diameter and spring tension in the well-spaced detents with 10.5 MRAD (105 clicks) per turn.

There is a zero stop with 11 underside ‘buffer’ clicks, which is super easy to set up or alter. There are two Allen screws that can be loosened, allowing the outer indicator to turn freely back to marked zero. With no clicks heard, you are assured the internal mechanics are disconnected and not altering anything.

None of this detracts from the turret’s locking capability, and at zero, a black button stands proud of the dial to retain position. A light press is all that’s needed to unlock and add elevation (or subzero stop clicks). As the first rotation is reached, this button changes roles and on passing 10.5 MRAD it lays flat to indicate turn two. When you reach the third turn (21 MRAD onwards), it recesses itself and a small silver button rises proud so that you can feel it with your fingers.

Overall mechanical travel within the tube is 35 MRAD for elevation, of which 30 are accessible in total from the M5C3 designated unit, which I found excellent in use. It passed all box testing procedures, matching all previously confirmed DOPE values for longer shots. 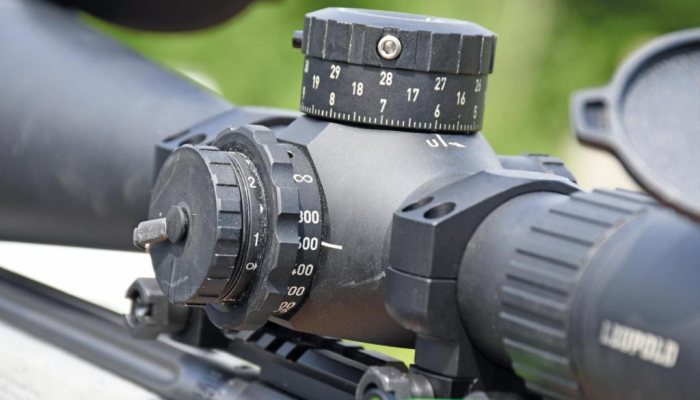 Parallax is controlled on the left side with a smoothly rotating, but firmly weighted dial that operates from 50 yards to infinity. There were no issues with backlash and a crisp image was always available. A rear fast focus dioptre collar has the detailed reticle covered similarly and never needed alteration after primary setup.

A CR2032 battery resides under the outer cap on the left side, with a retention cord so that it cant be lost. Illumination from the 7-stage dial has intermediate ‘off’ steps controlling the centre dot of the internal reticle and small red spots on the 2,4,6 and 8 MRAD intersections located on the lower 6 o’clock stadia, plus similar dots at 2 MRAD lateral spacing. There is no positional auto-off, so mind your battery.

Being in the first focal plane, everything on the reticle enlarges with precise correlation to the magnified image. Illumination is very subtle, never extremely bright, there’s certainly no sparkle or shimmer with a bleeding glow. In my opinion, it’s only a low light illumination assistant but like any complex reticle, will suit some peoples tastes better than others.

The ‘Tremor3’ reticle comes at a premium price, probably due to the extreme etched complexity and illumination precision, which I sadly found impossible to photograph while illuminated during use. With a stubby throw lever at 8 o’clock relative to the shooter, the magnification control runs clockwise from 5x, finishing on 25x with the lever at 2 o’clock. It won’t interfere with left or right-handed bolt handles and its modest 12mm (removable) length offers grip without excessive bulk. I found the magnification control fast to use with no internal noise or motion perception.

Image focal detail is flat across this width, with no fade out on the edges, bright and sharp, easily focussed precisely and remaining good as the light faded, without any specific steps in optical rendition. It certainly never went ‘milky’ above 15x, as one or two premium optics have in fading conditions. Eye relief was well specified for likely heavier/recoil-suppressed precision rifles at 91.5-96.5mm. The image was vignette free when central but the eye box was perhaps fractionally more critical than some.

The scope is also available in MOA and the HD specification certainly obtains richer colouration, which can often be ignored in precision rifle optics.

Only the buyer can decide whether the Tremor3 reticle meets their requirements and is worth the extra money, but this is a very capable long-range scope with easily used tactile turrets that are simple to set up. All the internal mechanics are in place for serious long range performance and assured dialling capability, but the other reticle choices seem more appealing, financially. There are some great turrets in this game, these are the equal of any, in my opinion, ideally blending function with ergonomics and without excess height.

This article originally appeared in GunMart. 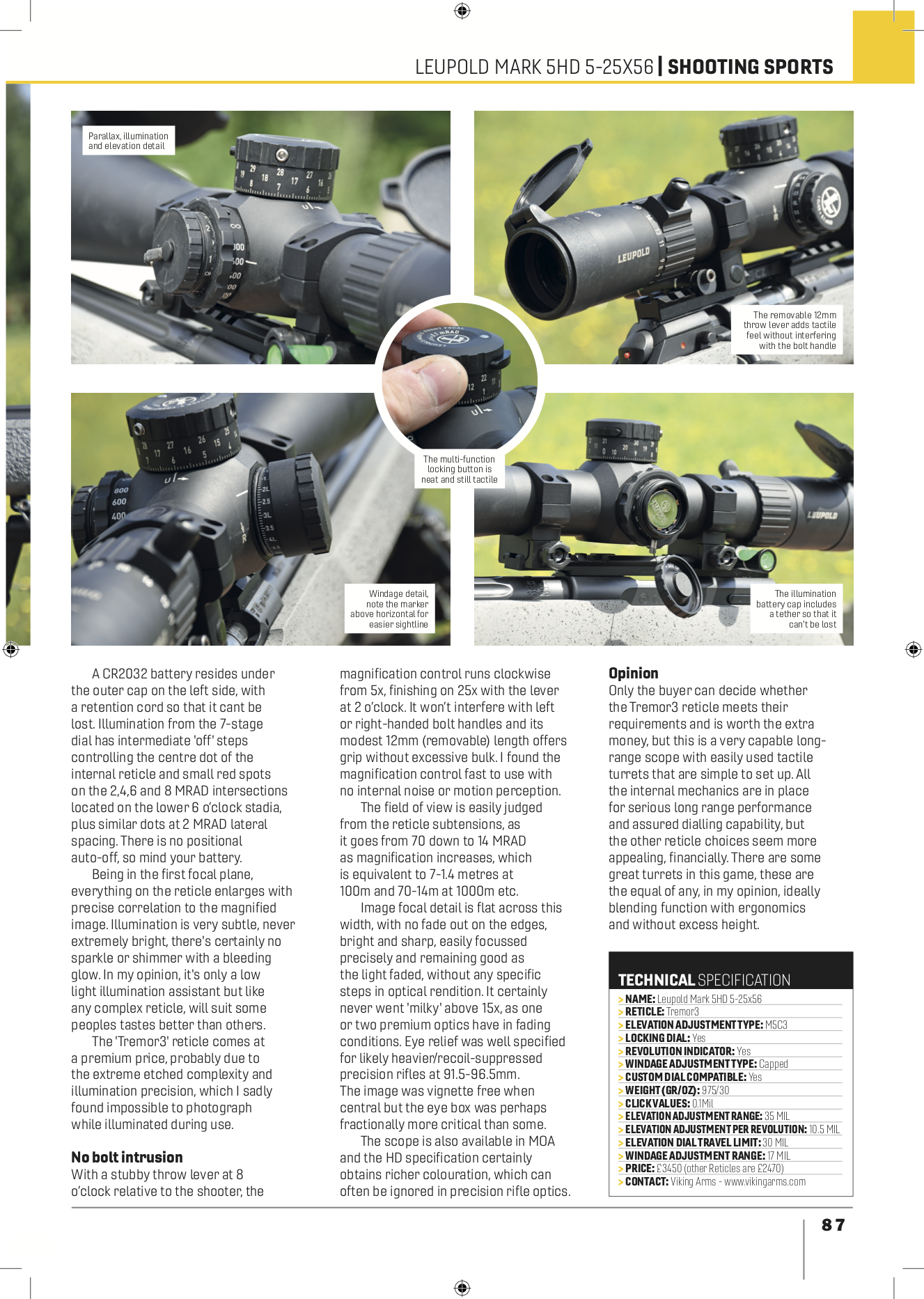