Breda 930i Sporting: On Test

Mike Yardley calls it a shotgun for the more 'refined' user. It may have class, but does the Breda 930i semi-automatic shotgun deliver a bang to be proud of? Here's Mike's review:

This month we have a Breda 930i Sporting under the spotlight. We had a more basic Breda a little while back, and I was interested to test this more refined version being a fan of semi-automatics. I have had good experiences with other Breda's previously too; they are inertia operated with a similar rotating bolt-head action to a modern Benelli. [Early Benelli's, and indeed some Breda's, are inertia operated but don't have the clever rotating bolt system.]

First impressions of the test gun are of a quite chunky, brightly finished, modernistic machine. It is probably brighter than my taste, that said, it looks rather smart and being Italian everything appears to be colour-coordinated! Apart from the brush polished silver receiver main body (it's a two piece design with a blacked steel top cover), there is a blue anodised alloy trigger guard and a blue anodised cap to the weighted forend cap, not to mention an extra large blue-anodised bolt-handle and similarly finished enlarged bolt release button. The barrel is 'gloss' blacked and shows signs of good preparation.

The 930i feels and looks a quality product. Levels of finish are excellent with nice wood grain too (which I am assuming is not enhanced). When you pick it up, however, the gun feels a little heavier than its 7.5 pounds (but that includes a weighted end cap weighing about 3 ounces – 7.35 lbs. without it). It is a little stock heavy with large stock shapes and the adjustable comb adding rearwards weight and a relatively short 28” barrel not counterbalancing it completely. My preference, especially in a gun intended for sporting, would be 30”. I'd go with a slightly smaller grip too. Nevertheless, the gun points well as a single-barrel repeater and the rib, a 10-8mm taper is really first class, one of the best I have seen recently. I also like the fibre optic front sight and the small silver steel mid bead (not normally my thing).

This Breda comes to the shoulder exceptionally well. The grip, which has a fairly tight radius, feels large as noted but the shapes are good and provide excellent purchase. The comb needed to come up about 1/8” to suit my Mr Average 5' 11” frame. The drop out of the box is about 2 1/4” to the rear and 1 5/8” to the front. This sounds low, but I thought it spot on for a gun with an adjustment facility. Some people need a low fit and this allows you to accommodate them as well as those with smaller heads/body frame needing a higher comb to look along the rib comfortably. 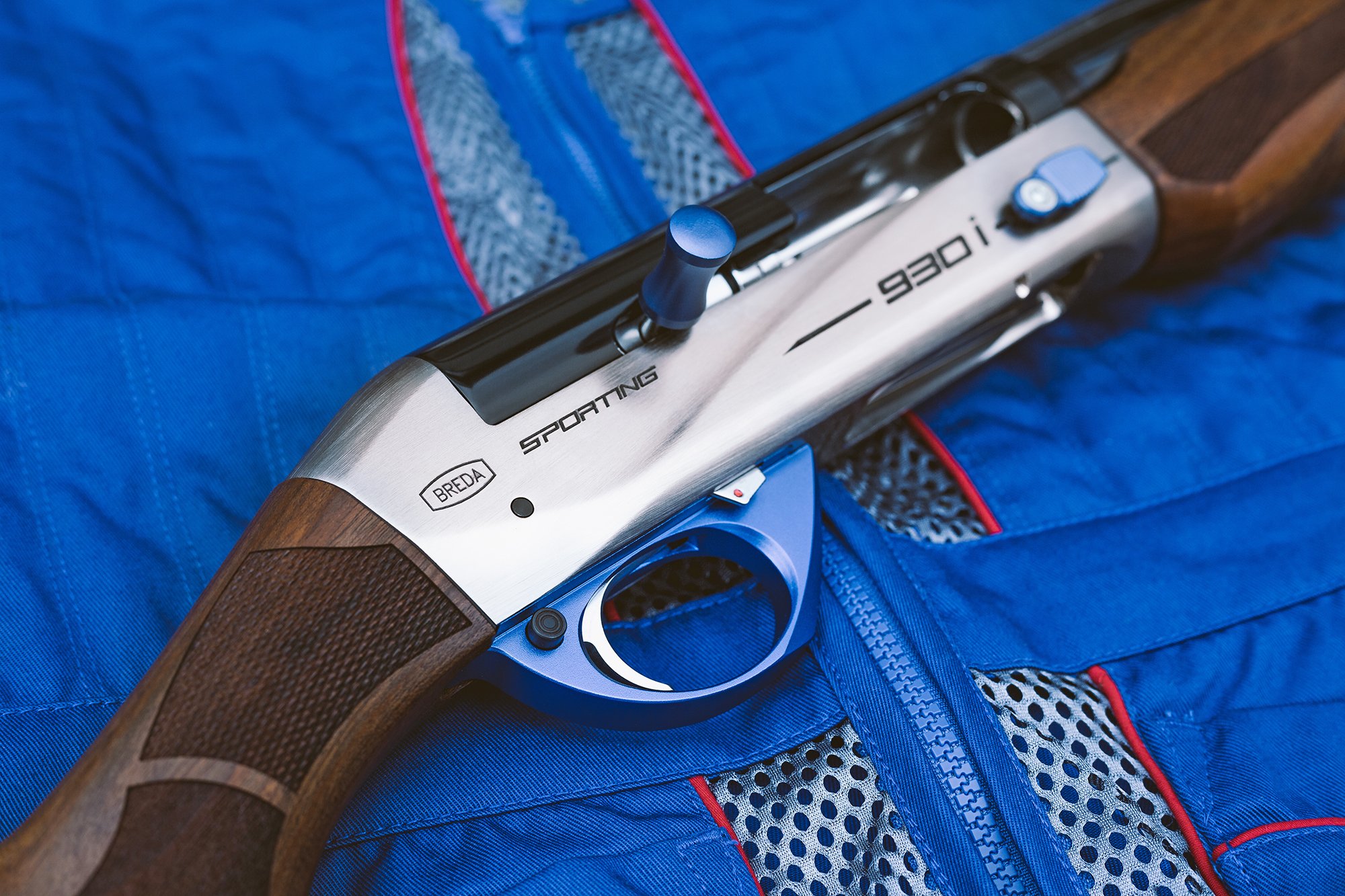 Looking at the dimensions further, the length of pull is 14 3/4” including about an 1” of plain black 'rubber' pad. This is standard enough, but there is almost ½” of extra length to the toe of the stock. This is a lot more than the modern average (but common on many Victorian guns and some best guns well into the last century). The length to heel, though, is just marginally more than the length to centre, I measured it at about 14 11/16”. These were unusual dimensions, but interesting because they seemed to suit me well – the gun felt very secure and stable at the shoulder. The good purchase on the large grip as discussed helped too (and I suspect this would still be retained if the grip was a little smaller).

The forend of the 930i was good as well – not too thick, but thick enough to hang onto it well. Both forend and grip are laser chequered with good sized diamonds. The wood surprised me with its quality and the oil finish was well done. Frankly, the more I handled and looked at the Breda, the more I liked it. I've good history with these guns. I shot an Ermes 2000 some years ago (again, a 28” gun) and was impressed with it. The 3.5” chambered gun we test here some months back was good. I think it would be fair to say Breda are underrated in the UK.

Technical
This is an inertia operated gun as noted with a fixed barrel. Early inertia designs like the Danish/Swedish Sjögren and Browning A5 involved large bits of metal moving (breach and barrel respectively). This Breda uses the kinetic energy of gun recoil to cycle the action too. It works, like the modern Benelli's, by the clever means of a short stiff spring positioned between the bolt body and a rotating bolt head. During firing, due the recoil of the gun, breech block inertia makes it move about 4mm forward, when this is fully compressed, it thrusts rearwards allowing the extraction of the cartridge case and reloading. The spring pressure is designed to delay the opening of the action which occurs after the shot has left the barrel and the spring regulates the different pressures produced by different cartridges too. The system is simple and robust operating with only two locking lugs on the bolt-head. Unlike a gas operated gun, the system needs no bleed holes in the barrel and minimises working part s (and hence cleaning). A rat's tail hinged on the end of the breach block returns the gun to battery.

Shooting Impressions
I like inertia operated semi-autos and am always interested to test them as a semi-automatic fan. I love gas operated guns too (especially the Beretta 300 series in particular) but I am also a fan of Breda having had one when I was a kid (the Breda version of an A5 Browning). The test gun did not disappoint. It pointed well even with the relatively short barrel – effectively extended by the grooved receiver top channel which effectively adds about 6” of 'rib'. The controls worked well. I loved the extended bolt-handle. The only problem with the big release catch was that I found myself operating it accidentally as I slipped the gun. Nevertheless, I really liked the ergonomics of the 930i. It's shooting qualities were first class. In particular the lack of felt recoil for this mechanism type. The barrel is bored relatively tightly at 18.5mm but has a very long forcing cone. I had a couple of cycling issues with light loads (I would always advise 70mm 28gram cartridges with an inertia gun). Overall, an impressive semi-automatic and one which is very nicely presented and well engineered.

Thanks to Lyalvale Express for the cartridges used in this test.