In our latest dealer spotlight series, we caught up with Chelmsford-based Merkel rifle dealers Eastern Sporting who shared some exciting news with us!

They're in the process of planning one of the biggest shooting developments Essex has seen in decades. Plans for the Brentford site include a clay shooting ground, shop, clubhouse, restaurant, bar and eventually a rifle range.

The business has come a long way since it was founded by father and daughter team Alan and Amanda Walker in 2006. Alan was a sales rep for a leading UK shotgun brand and saw an opening for a shooting store in the Chelmsford area. His daughter Amanda had a passion and flair for clothing and accessories ad together they established what has become a focal point for sporting shooters in Essex. Fast forward 16 years and it's still a family business, but it's no longer a start-up, they now employ a team of six and have recently sold elements of the business to Grange Management Holding who will be overseeing the development of the new shooting ground. 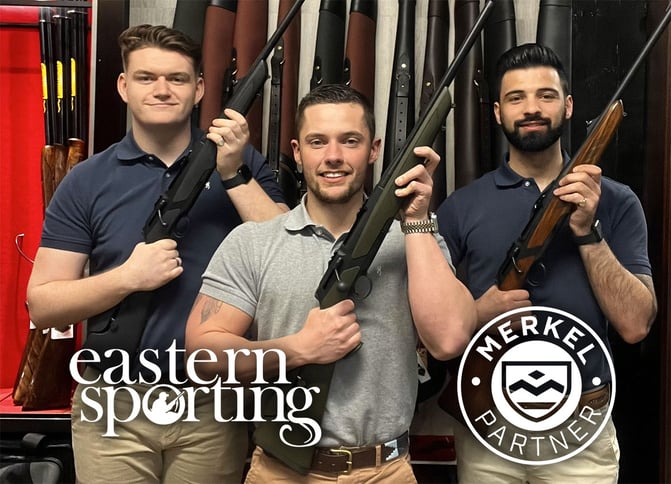 Merkel rifles will be available both in the Chelmsford and in the planned new Brentwood shooting store. Shane is Eastern Sporting's rifle expert and explains why they decided to stock Merkel rifles;

"Alan's first love will always be clay and game shooting. He's a font of knowledge on shotguns. When I joined the business I wanted to focus on centrefire and rimfires as few shooting shops in our region were offering hunting rifles".

"Bringing in a premium brand was key, and having used Merkel rifles in the field and known shooters who swore by them, I knew that these centrefires would be a perfect fit for our clientele".

"Rifle shooters choose Merkel guns for the straight-pull bolt action and the ability to change calibre. Merkel guns are made really well, they outperform the Blaser straight-pull equivalent both in design and performance", Shane adds.

'Disassembling a Merkel rifle is also straightforward - there's no need to take the whole trigger assembly out of the gun unlike when disassembling a Blaser. Merkel has been a hit premium product for Eastern Shooting.

"Customers really appreciate the craftsmanship that goes into these guns, we've recently sold a special order Merkel Helix Arabesque with a higher grade stock and the most popular model at the moment is the Merkel Speedster Synthetic - they're a really good alternative to Sako and Tikka rifles", says Shane.

"If I had to choose my go-to Merkel rifle it would be the Merkel Helix Speedster in green with the pistol grip. The modular system is really useful, twin this with the open thumb hole and it's a really well-balanced hunting rifle", adds Shane.

Visit Eastern Sporting in Essex and get your hands on their range of Merkel rifles.