Home » Latest » Why is the Merkel Helix Explorer the best gun for deer hunting?

Why is the Merkel Helix Explorer the best gun for deer hunting?

I’ve often looked at switch barrel rifles over the years, though I’ve never really considered buying one, but now something has changed. Just recently I find myself creating my dream deer stalking rifle in my thoughts and one name keeps coming to the fore.

The Merkel Helix is a seriously sexy bit of kit, said by many to be one of the best hunting rifles you can buy. It offers a huge list of desirable features, not least of which is the opportunity to choose the ideal calibres for my needs.  I regularly shoot Muntjac, Roe, Sika and Fallow deer and I plan to go after reds in the future, so what should my perfect gun cabinet hold?

I’ve always had a soft spot for .243 for foxes, Roe and Muntjac, so I could have a soft-shooting, relatively quiet gun for them if I chose this old favourite. For the larger deer I’d like something capable of anchoring the biggest red stag, even if I was forced into taking a longer shot than I’d like and the 8x57 would be my choice. I also quietly harbour a dream of hunting in Scandinavia one day and I’m advised by those who know that this cartridge does well on moose. I’d quite like an affordable 308 rifle too and I’m still thinking about that choice. I guess this might open up the .243 vs .308 argument but being able to choose as I please would be a luxury I’d love. 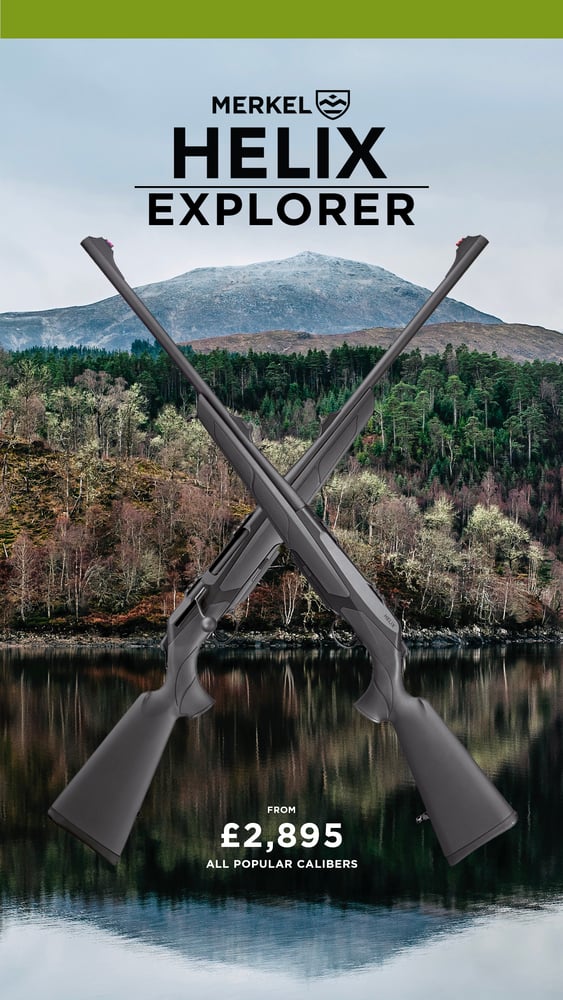 The barrel switching system on this rifle is incredibly simple, requiring no tools at all and taking just moments to complete. I’ve watched test videos where groups were shot, the barrel removed and replaced and then another group fired. Both times the zero stayed spot-on which is very impressive.

My dream set-up would extend to a specific scope for each calibre: something with lots of magnification and a fine reticle for the .243, an all-round optic for the .308 rifle and something low mag with a very bold reticle for the 8x57. Perhaps a red-dot scope for the moose would round out my optical fantasy. Because the Helix has a Picatinny rail integral to the receiver, you can be confident that the scope will return to zero. How do I know that? I met a chap who owns a Helix who told me with absolute confidence that his does, every time he swaps calibre and optic. He did qualify that by saying that he uses very high-quality mounts but if you’re building the best rifle/scope combination you can, using cheapo mounts would just be stupid, right?

By coincidence, one of my stalking friends has just succumbed to the runaway SUV illness, buying a pointlessly big car that has no space inside. Much to his regret, he failed to measure the stupidly small boot space and has found out to his cost that he cannot lay his rifle flat on the floor, so has to put it across the back seat, which is less than ideal. When I mentioned break-down rifles he began asking me about the Helix so that he could get his stalking gear all in the boot where it belongs and I’ve told him that I think it would be a good choice for him. Once broken down, the Helix fits into a small and inoffensive case that might just as well contain an instrument or tools, so nobody would give it a second look as they walk by.

There are many models in the Helix range and I particularly like the look of the Explorer, which to be honest is partly because it’s the most affordable and partly because I like the more traditional looks compared to some of the models. At its heart, the mechanical action is the same as all the others and it wears a simple matt black finish which sits comfortably beside the black synthetic stock. I can’t imagine going back to a wooden stock these days. Synthetics take all the bumps and knocks, the mud, blood and rain and after a quick wipe down, are ready to go again.  The Helix’s impressive rapid reloading ability isn’t important for the kind of shooting that I mostly do but I love the idea of having a de-cocker, so that I can carry the rifle with a round in the chamber but with the hammer spring relaxed for greater safety.

Using the word affordable is, of course, relative for a rifle at this price but I feel that the Explorer is a lot of gun for the money, especially when you consider that functionally, it’s identical to even the top of the range Helix Noblesse that costs over £6000. As a wise man once told me ‘if you want Porsche quality, you’re going to have to pay Porsche money’. 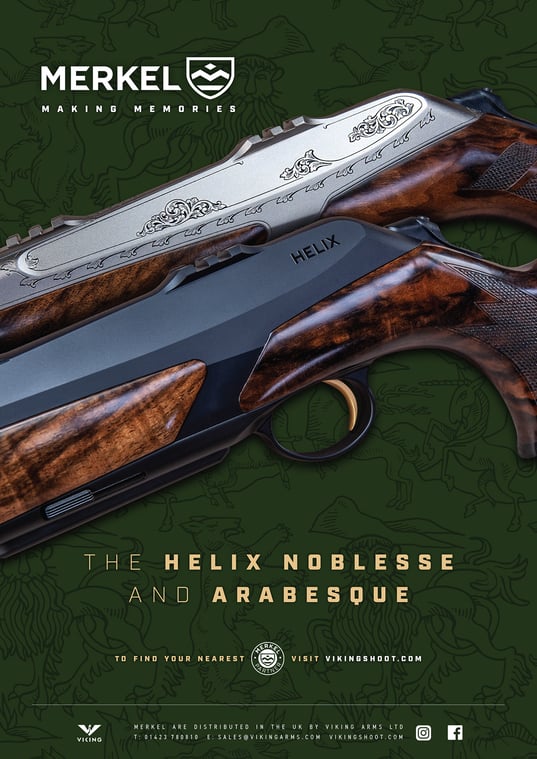 I always use a moderator and the Explorer’s muzzle is screw cut M15x1 which isn’t the most common size of thread but enough manufacturers, especially the European ones, offer ‘mods in this size that I can’t see getting one being a problem. I read somewhere that Merkel are offering one of their own, so that will be worth a look, I’m sure. I don’t think they’d put their name on anything that wasn’t top-class. They’ve collaborated with B&T from Switzerland, and they know their stuff.

Having three calibres being able to be shot through one action has great appeal for me as I dream of making the very best gun for deer hunting in the UK. That appeal is simply familiarity. Knowing the feel of the stock in your hands intimately, the reach to the trigger blade perfectly and the subtle way your trigger breaks, is so important. Being as one with my rifle lets me focus on precise aiming and best technique, without the need to accommodate a new gun’s idiosyncrasies. With muscle memory perfected through hundreds of shots, the rifle becomes an extension of us and I think that adds a little extra magic to any hunting trip. 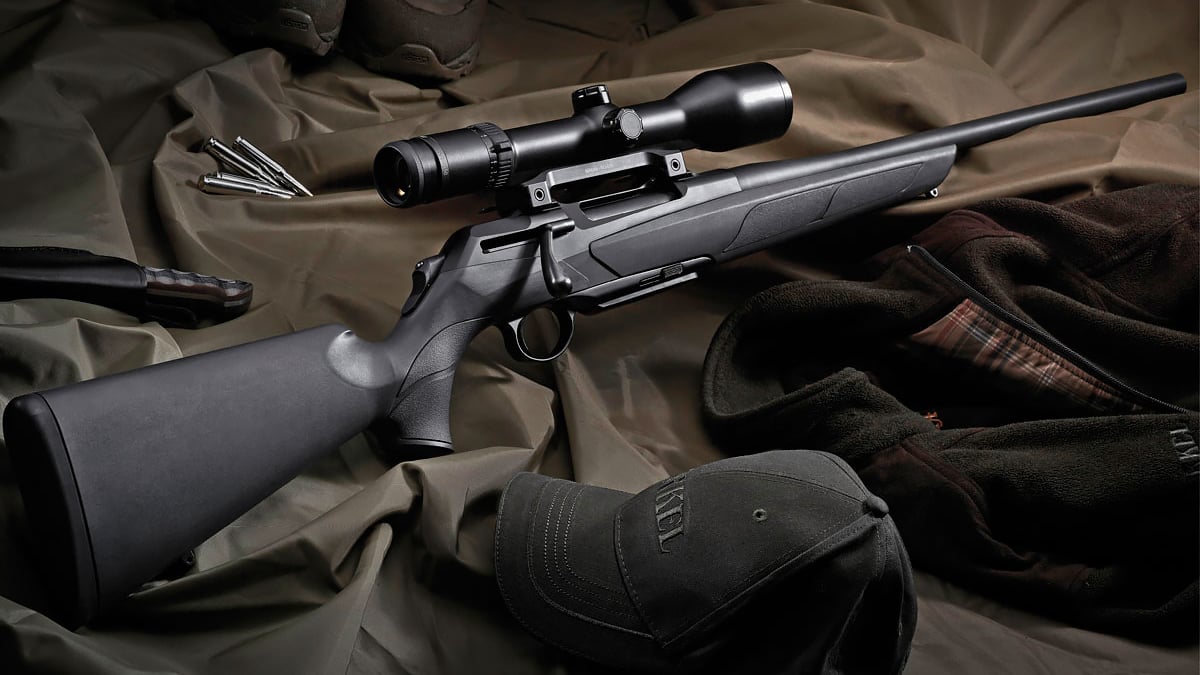 The Helix is a modular system, meaning that you can upgrade any model, from the most humble up, to fit any barrel, stock or magazine you choose, so you might consider the Explorer to be perhaps the first step on the ladder of your Merkel journey. By the same token, you can add more calibres too, if you choose. In my eyes this gives great freedom: it’s not just a rifle you’re buying, it’s a world of opportunities.

So, what I’ve described here is my dream gun and calibre selection. Will I buy it? I’m not sure. Perhaps I need to think through some of the other 6000 permutations of stock, barrel, finish, engraving and calibres etc that the Helix range can offer. Further, it’s fair to ask if my choice could really be the best gun for deer hunting for everybody? I think it would be for me but I’m sure that you have your own recipe of actions and calibres in your head, don’t you? Ah, the pleasure of daydreaming about your ideal rifle is great fun and better still, it’s free!