Drennan Kenderdine tests two versions of Breda’s cracking competition grade 930i, and finds them as different as Jekyll and Hyde in character!

When it comes to semi-automatic shotguns, the Italians have it covered with some of the biggest names in the shooting world, such as Beretta, Benelli and Breda. The team at Viking Arms UK (Breda's UK importer) are a proud bunch, especially of their semi-auto range. So, they were pretty pumped up when they asked me to “put our Breda 9300i semi-auto Competition Grade through the mill”, and not just one of them! I had the pleasure of trying both a 28" and a 30" version, and the results were surprising.

Both the 930i guns came with a plastic flight case, three Maxi90 extended chokes, and stock and fore-end weights, as standard. Once out of the case, you don’t need to have a degree in engineering to notice the quality of the CNC machining on these two guns. Some of the work must have given even the most accomplished CNC G&M coder a headache, especially the trigger group, which is entirely CNC machined from a solid billet of ergal aluminium alloy. 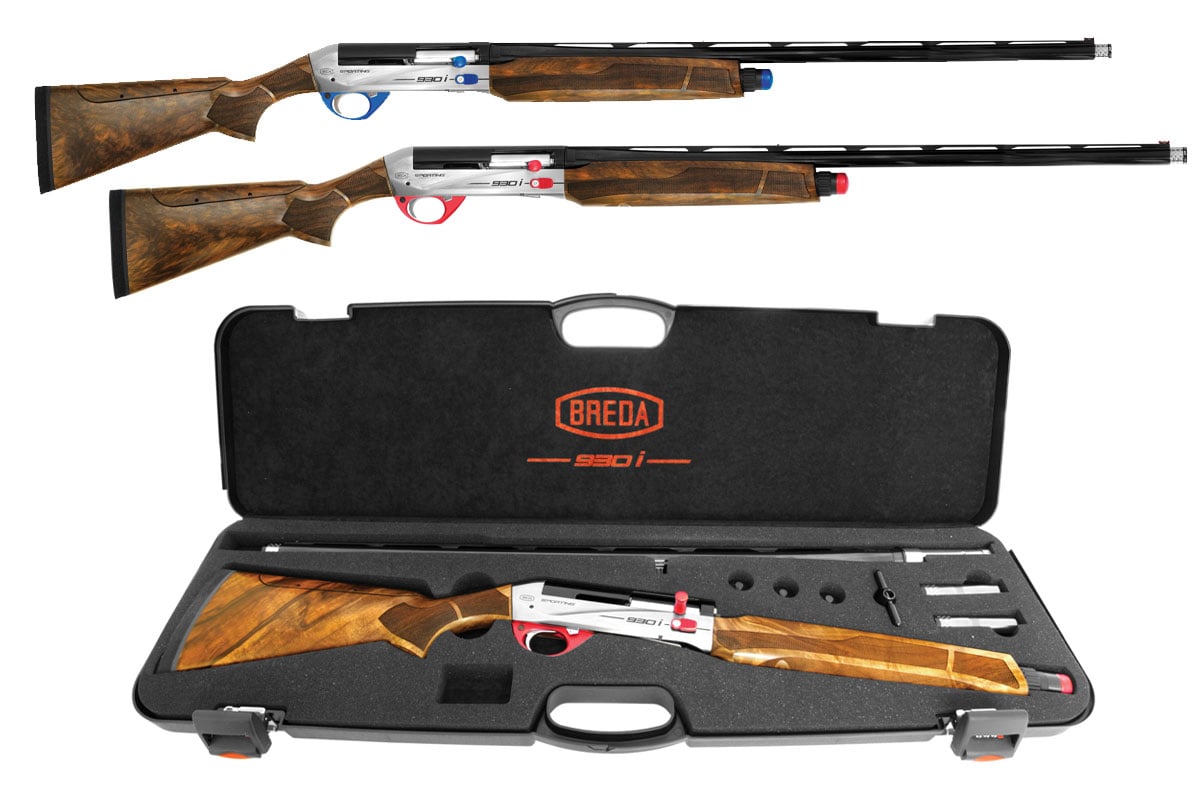 One of the most striking things is the weight of these guns when assembled. Without the weights (supplied), these are very light guns and as fast as a cheetah in pursuit of a gazelle. Adding weight to both the stock and fore-end is as easy as painting by numbers. Removing the weights... just as simple. When would you use this feature? Well, I see many benefits to being able to add and remove weight to guns. A light gun is ideal for those unable to carry a heavier gun, although I have to say that I like my guns with a bit more weight to them, especially to the rear of the gun. Gun weight is a personal thing, which makes this simple on/ off system very valuable. These are striking looking guns. There’s no doubt they are designed for top competition shooting. Breda’s double nickel plating guarantees unparalleled strength, and atmospheric and corrosive protection, whilst giving a distinctive bright colour to the frame. With a choice of blue or red details, the anodised parts, including the trigger guard, bolt handle and fore-end retaining cap, stick out like a lighthouse to a sailor. And credit where credit’s due, the anodising on these Bredas is stonking! 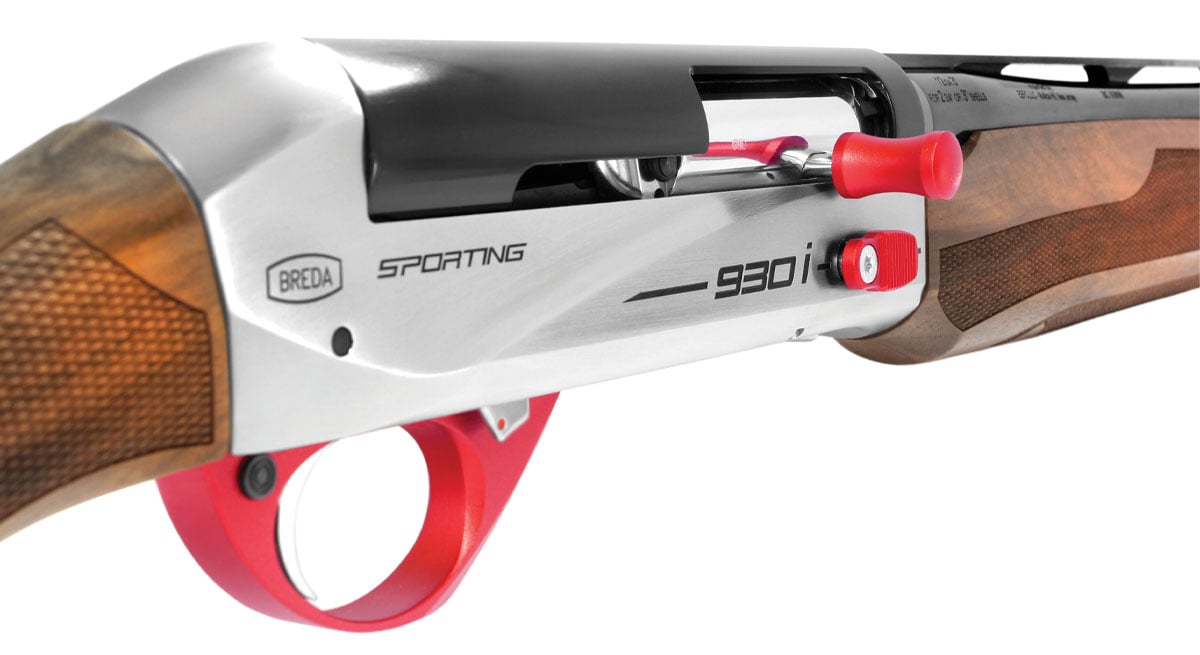 MORE IMPORTANTLY... I love semi-autos; I have many of them from a host of makers, with a price range stretching from the equivalent of Aldi right up to Harrods. Autos have changed a lot in the last few years, and they now come with upgrades which I frankly adore. Take the bolt handle on a conventional auto: yes, it works, but if you then compare it to an oversized one, the operation of the gun goes from functional to fantastic. The same goes for the bolt release buttons. On the Breda 930i, the bolt button and bolt lever are both oversized, making for beautifully simple operation. This model comes with an adjustable comb and, keeping things real, this is the one moan for me. Don’t get me wrong, it works and does what it’s supposed to do, but it may let the gun down for some shooters, and I’m one of those shooters. The cut of the comb is shallow, and if you shoot with a ‘head forward’ style and with some cast, there’s the possibility of not having enough material in the comb to allow the lower part of your face to come into contact with the stock. For me, being broad and requiring a lot of cast (off) and five spacers worth of lift to the comb, I found the lower part of my face touching the lower part of the stock. My Beretta is the same – it’s not just Breda who make these combs possibly a little too thin for some shooters. On the plus side, the woodwork is rather good, and with its two styles of chequering it's not only unique, it’s actually great to look at. With a conventional chequering style on some panels and a stipple effect on other panels, it allows you to grip the stock and fore-end as Eddie Hall does a set of dumbbells. Speaking of fore-ends, the fit of this over the magazine tube is so good that the dreaded hollow feeling you often get from semi-autos has been eliminated, making this feel sturdy and handle solidly.

HOW DOES IT SHOOT?

The Italians are known for using ammo that us Brits did away with back in the 20th century. This sometimes compromises the kind of cartridges we can put through Italian semi-autos here in the UK. One thing’s for sure: whether it’s here or anywhere else in the world, it must be a minimum of a 70mm case. Anything less and you’re almost guaranteed jam after jam. The good news is that I pumped a range of cartridges through these guns (more, I suspect, than anyone who actually owns one!). The loads went from 70mm 24g up to 3" 50g. The inertia operating system cycled these like a hungry hippo! Plus, stripping the Breda 930i for cleaning and maintenance is as easy as building a Lego set with 8+ on the box. Operation on both these guns is identical when it comes to loading, gun fit and cleaning; what separates them is the way they handle when shooting. Let’s remember that both these guns have been balanced to my style of shooting and preferences. The handling of the 30" is like looking down a runway with its high luminosity fibre optic sight pinging out at the end of the barrel. It moves and delivers with clarity and glides with the grace of an osprey. It really is an extension of you. On the other hand, the 28" behaves more like Conor McGregor – punchy, edgy, fast, feisty, and liable to attack the targets like a sprung viper. I love this gun, especially for close birds on Sporting or Skeet. Which one would I choose? Well, it would have to be the 30"; it’s more akin to my style of shooting and what I shoot regularly. However, I wouldn’t turn down using the 28". They are as good as each other, but with very different characters. I would highly recommend that you try each of them out as they are so, so different to shoot, but one of them will definitely tick the box for you!